Ernest Rosenthal, Centenarian and Otis College Alumnx, Reflects on His Art and Time as a Student 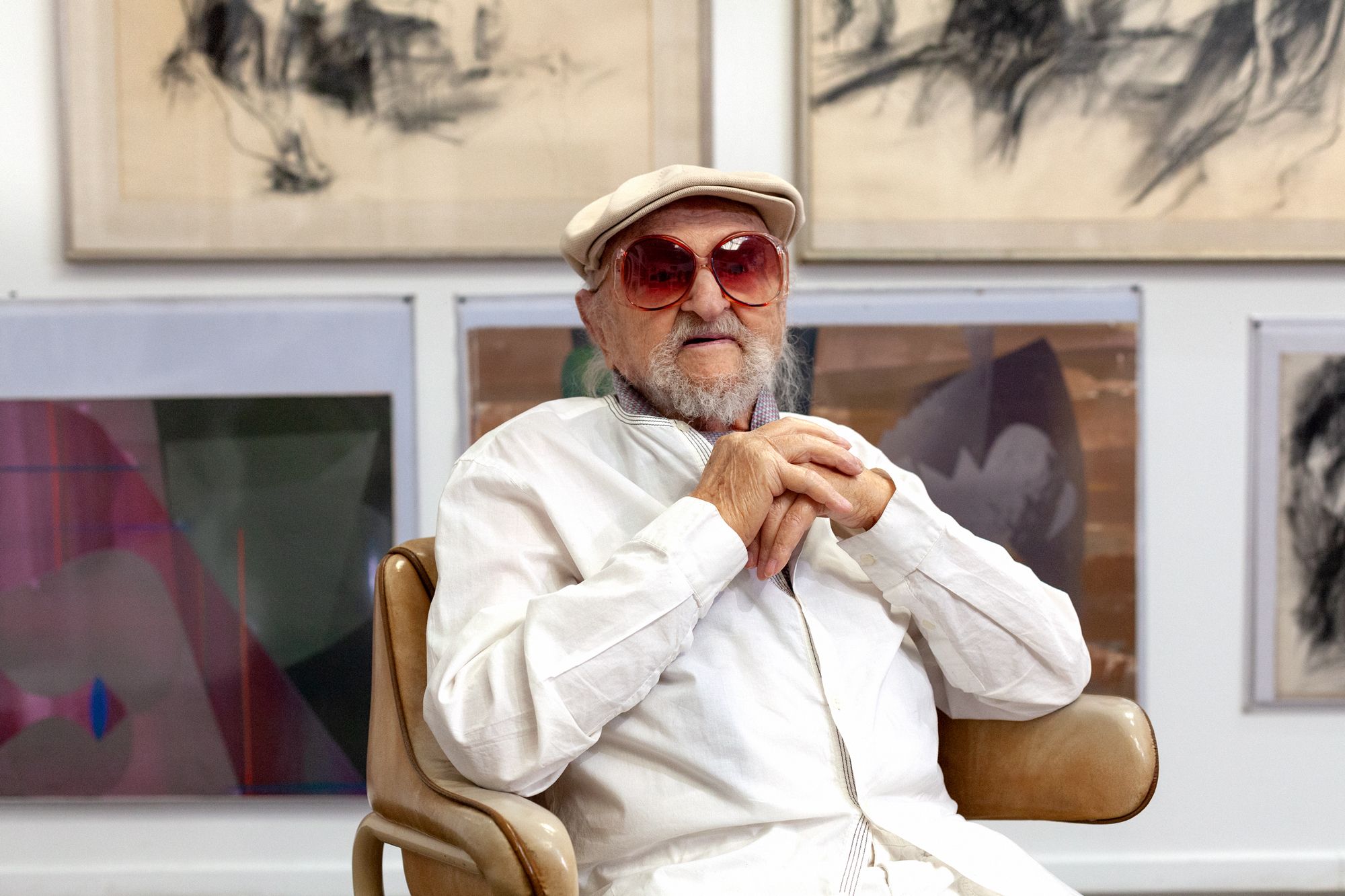 Ernest Rosenthal against some of his works in Retro/Introspective with LAST Projects at Tin Flats art space. Photo by Monica Nouwens/Otis College of Art and Design.

At 102 years old, Ernest Rosenthal has lived through enough experiences to fill two or three lifetimes. He was born in 1920 in Vienna, and remembers hitchhiking to Paris for the 1937 World’s Fair, where he saw Pablo Picasso’s Guernica, which had a profound impact on him. Just one year later, he fled with his family to Brussels when the Nazis occupied Austria. In Belgium he studied sculpture for six months before he and his family were given refugee status and moved to the United States. He was drafted into World War II in 1943 and spent most of his time serving in Iceland, and in the years following the war he was stationed in France, where he acted as a French and German translator for the U.S. Army.

In the 1950s, the G.I. Bill allowed Rosenthal to study painting and printmaking at La Esmeralda National School in Mexico City, which he followed by attending what was then known as the Otis Art Institute, where he was a protege of Swiss-American Abstract Expressionist artist Hans Burkhardt, who was an instructor there. He met and married modern dancer Meryl Stritman and they painstakingly built a home together in Laurel Canyon after buying several plots of land there. Rosenthal went on to launch the print-making program at Occidental College in the mid-1960s, and also taught at California State University Northridge and California State University Dominguez Hills, where he worked until his retirement in the 1980s.

Rosenthal has been a diligent archivist of his eight decades of work—spanning sculpture, painting, and drawing—which was on full display at Retro/Introspective, an exhibition that recently showed with LAST Projects at the Tin Flats art space in the Frogtown neighborhood of Los Angeles (the exhibition ended in March). “Ernest’s work is a tour de force of 20th century European, Abstract Expressionist experiments in minimalism and space and light, and an intimate autobiographical fusion and remixing of it all in his last prints. It’s absolutely extraordinary,” says LAST Projects owner Ilona Berger, who helped Rosenthal mount the exhibition.

Video by Jennifer Atalla/Otis College of Art and Design.

A recent profile in the Los Angeles Times described it thusly: “Eschewing a chronological format, the retrospective draws connections among works from different eras, media and techniques: from raw, sensuous life drawings to painterly portraits and still lifes, to prints that straddle the line between figuration and abstraction.”

Last month I met up with Rosenthal at Tin Flats. Sitting in a hangar-like gallery surrounded by grand pieces of his work and a rapt audience of friends, family, and strangers who just happened to stop by at the time, Rosenthal answered a few of our questions, showing a dry humor but also a sentimentality about his life and work.

What are some things you remember about being an art student?

My memory, as far as the sequence of events is concerned, places or dates, or what have you, is very faulty. But I was in Mexico, officially covered by the G.I. Bill of Rights. We had very little contact [with each other] as fellow students. All I know is, I signed in, I went home to a rented little apartment where I had set up my studio, and I worked at art. There were some instructions granted by the institution. They did teach me the rudiments of intaglio printmaking, etching, and so on.

How did you end up at Otis?

Before I went home from Mexico, I was looking for a place to study sculpture. I had the idea that I wanted to be a sculptor. That had to do with my environment when I was a boy growing up in the inner city of Vienna. I had met an academic sculptor, and I was fascinated. I had no idea what the broader implications were in any realistic way, with respect to making a living, or with respect to reaching any kind of level of accomplishment. I went down to UCLA. There was an old man who was demonstrating, making a clay model of Abraham Lincoln. He had been doing this for some time at UCLA, and he was aware of another man doing sculpture in Los Angeles by the name of Harold Gebhardt. He did abstract forms, carved in stone, and he happened to be teaching at Otis. So, I went to Otis.

I became student body president in 1951, and was president from ’51 to ’54, I think. It was a hard political climate at the time. It was the McCarthy era, and it was a political office to be student body president. I remember certain incidents, like there was an exhibit of some paintings, and in one painting in the background there were boats with sails. There was a boat that had a red sail. That was interpreted as a Communist conspiracy. So we had to defend ourselves as best we could. Aside from Harold Gebhardt, there also was Joe Mugnaini, who was teaching painting, and he was illustrating The Martian Chronicles by Ray Bradbury at that time.

It was in the early days, and, of course, you know the campus location was on Wilshire Boulevard across from MacArthur Park, and there was a statue of General Otis across the street, and he was pointing at the institution. The classes were conducted in what seemed to be a living room with a fireplace, and things like that. It was rather elemental.

What advice would you give an art and design student today?

As for advice, it’s no use saying that you’re married to your work or anything. You have got to have somebody helping you—no question about it—if you want to get anywhere. Of course you have to have something to offer, but that alone isn’t going to do it.

What do you feel you’ve learned about yourself as an artist?

I’ve learned that I was very bad at self-promoting. I missed opportunities. Because whereas you need some recognized authorities to validate you, you also have to give your best to your self-promotion. I missed that. I’m only now catching up, and it’s a little too late because I am disintegrating, and I’ll roll off this flat planet and drop off into oblivion presently. Which is OK, because where this world is going, I don’t want to go anyway.

[Gesturing to his work] Anyway, this is what I have come up with. Some of the stuff over there, student work, I didn’t even want to show, but I was persuaded to let everything hang out. In the corner over there, is a little memorial installation to my wife, including a bust of her head that I had done years ago. It’s been outside where the rain hit it, and substantially improved it. It looks much more intriguing at this point than it was when I finished it. And so I have a problem with what to do with all this stuff. Some of it has been sold. If anybody has any ideas, let me know.

All photos by Monica Nouwens/Otis College of Art and Design. 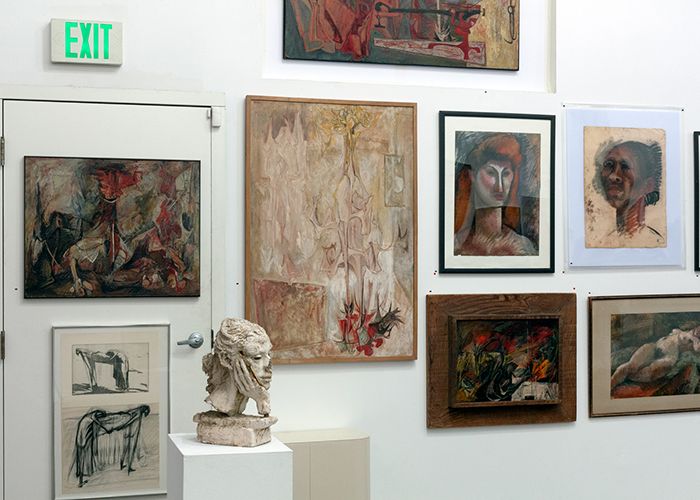 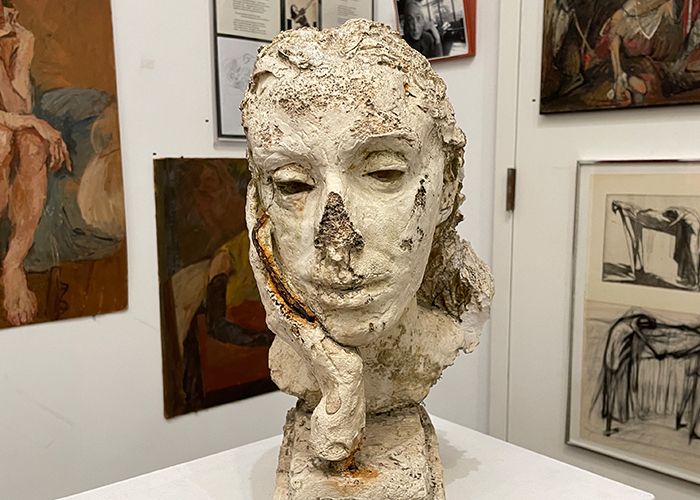 Rosenthal’s sculpture of his wife, Meryl Stritman, a modern dancer, sometime art model, and his muse. 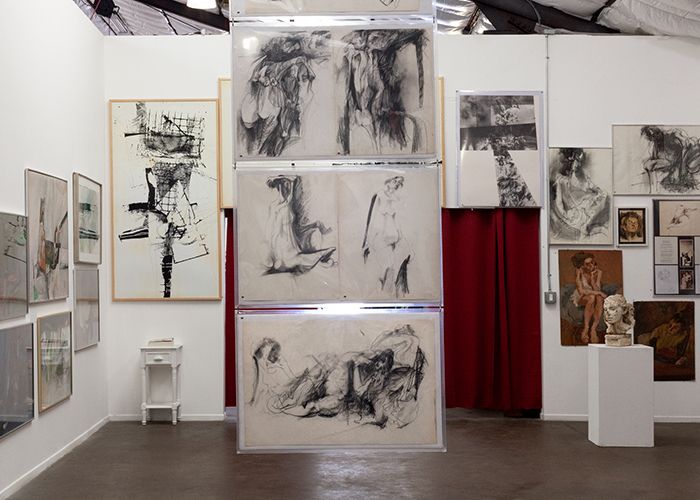 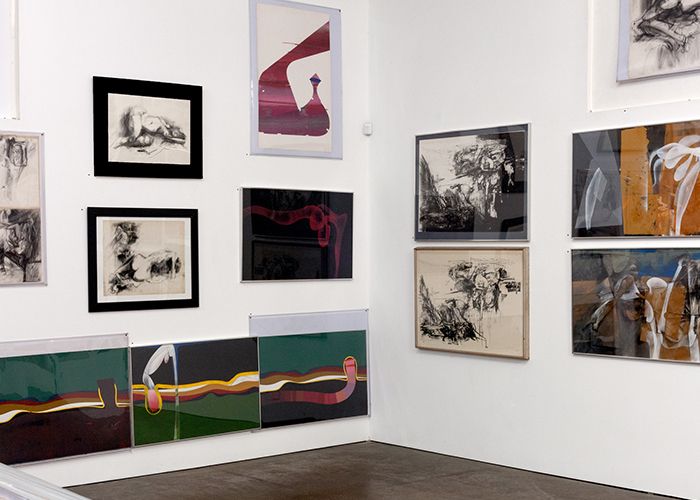 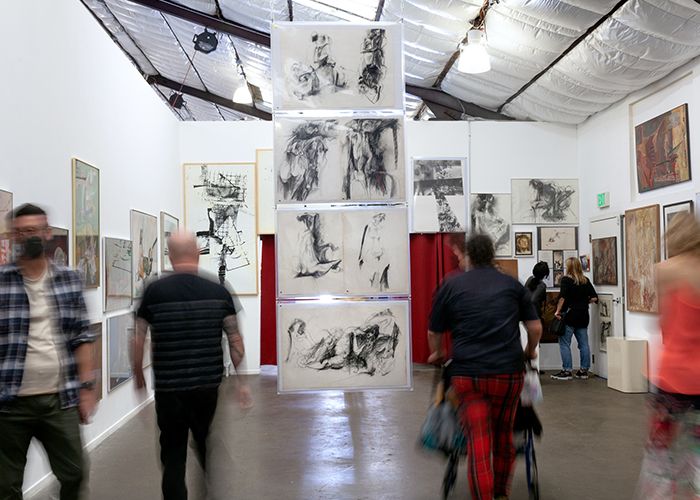 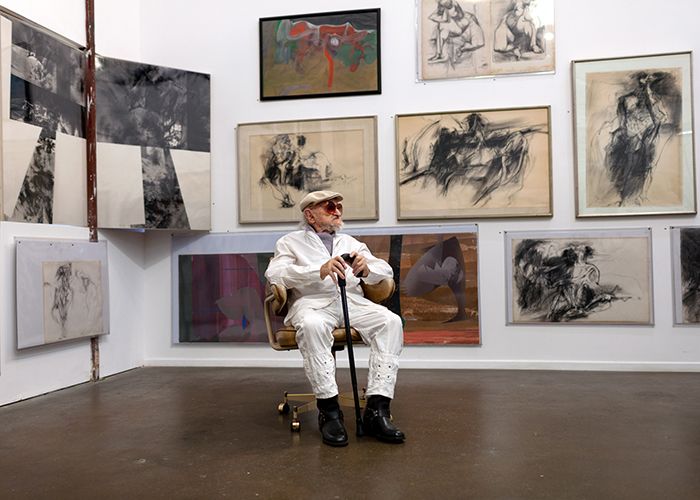 Rosenthal against his work in Retro/Introspective with LAST Projects at Tin Flats art space.