Back to current Issue 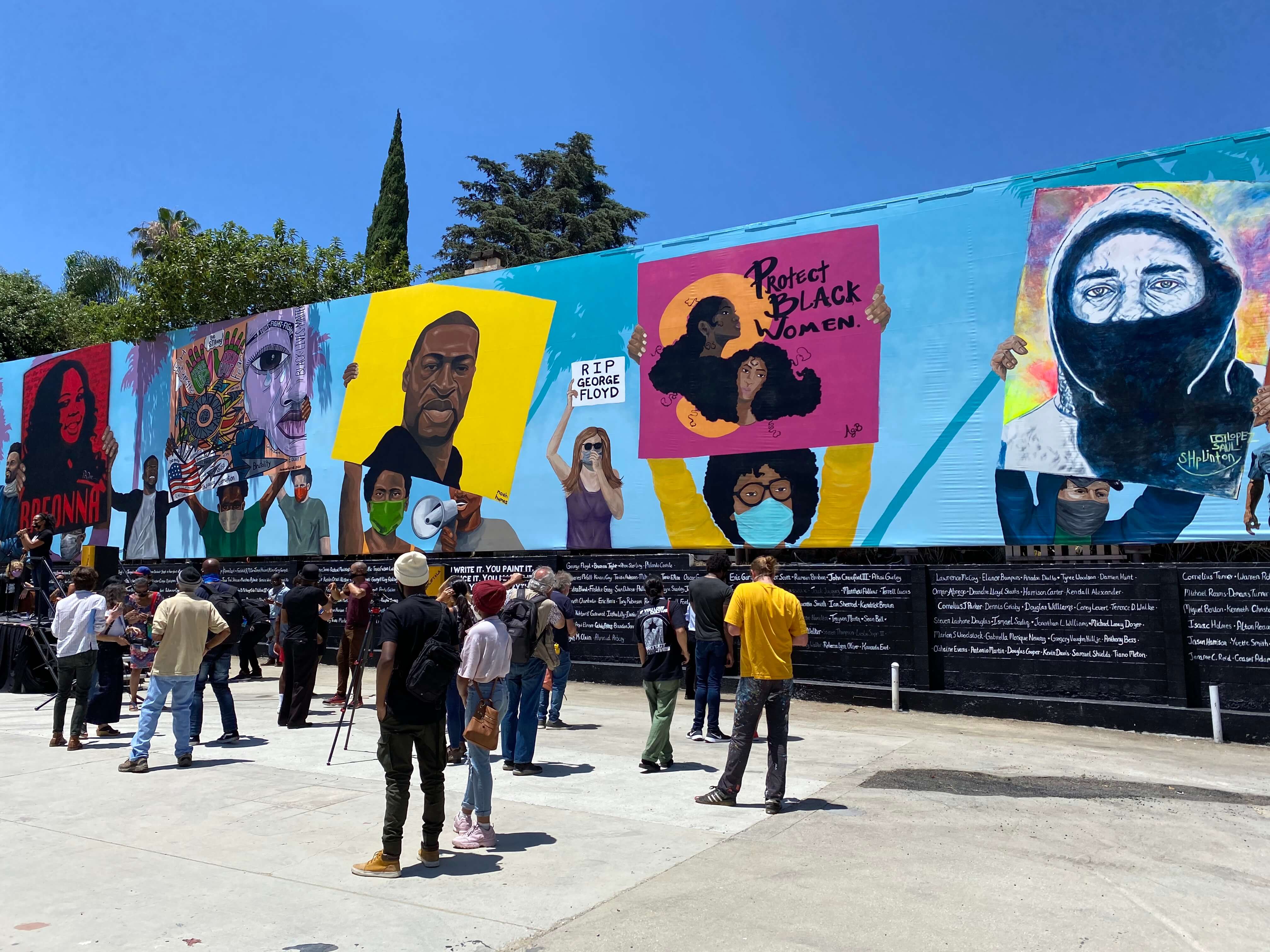 Against a bright yellow backdrop, George Floyd’s face looked out over the crowd of masked, socially-distant onlookers, as a singer performed a rendition of Sam Cooke’s “A Change Is Gonna Come.” Noah Humes (’17 BFA Communication Arts, Illustration) had painted Floyd’s visage on a protest sign on a mural where, on one side was a sign that read “Protect Black Women” and, on the other, a diagram on the effects of systemic oppression. Panning out, there were more signs—one of Breonna Taylor, another a self-portrait of an artist at a Black Lives Matter (BLM) protest.

Usually bottlenecked with traffic, the section of Sunset Boulevard in front of the Laugh Factory Hollywood was uncharacteristically quiet on this July afternoon, blocked off for the unveiling of what, at the time, was considered one of the largest murals dedicated to the BLM movement in the country. Only from across the street could the block-long, 148 by 20 feet mural be viewed in its entirety.

For many, 2020 has been a year marked by unprecedented change. By the end of spring, the social isolation and panic created by the COVID-19 pandemic compounded the outrage over the video of Floyd’s murder by police officers in Minnesota. The frustration of generations of unmet calls for justice and racial equity caused a resurgence of the BLM movement, which was founded in 2013, and prompted denunciations of police brutality and systemic racism from corporations like Nike, Disney, and Google, as millions across the nation took to the streets in protest. The message expressed by all was clear: meaningful, lasting change had to happen.

Three Otis College alumnx—Humes, Aaron Gonzalez (’19 BFA Communication Arts), and Patsy Pitts (’18 BFA Fine Arts)—each responded to the moment by contributing their artistic practice to public discourse, painting murals that spoke to the calls for justice and equity, past and present.

Humes was contacted by the nonprofit organization, Arts Bridging the Gap, about the Sunset Boulevard project, which was commissioned by Laugh Factory founder Jamie Masada and Los Angeles’s Fourth District Councilmember David Ryu. “There was an immediate sense of excitement to be a part of this project, to be able to share my vision in regards to the racial climate over the last several months,” Humes says of joining forces with artists Alexandra Allie Belisle, Amanda Ferrell Hale, PeQue Brown, and Shplinton, who each contributed different parts of the mural. “It took us a week and one day to paint from start to finish. In late June in Los Angeles, some of the best times to paint were around 2:00 to 3:00 p.m. I also had to learn to face my fear of heights for a week.” 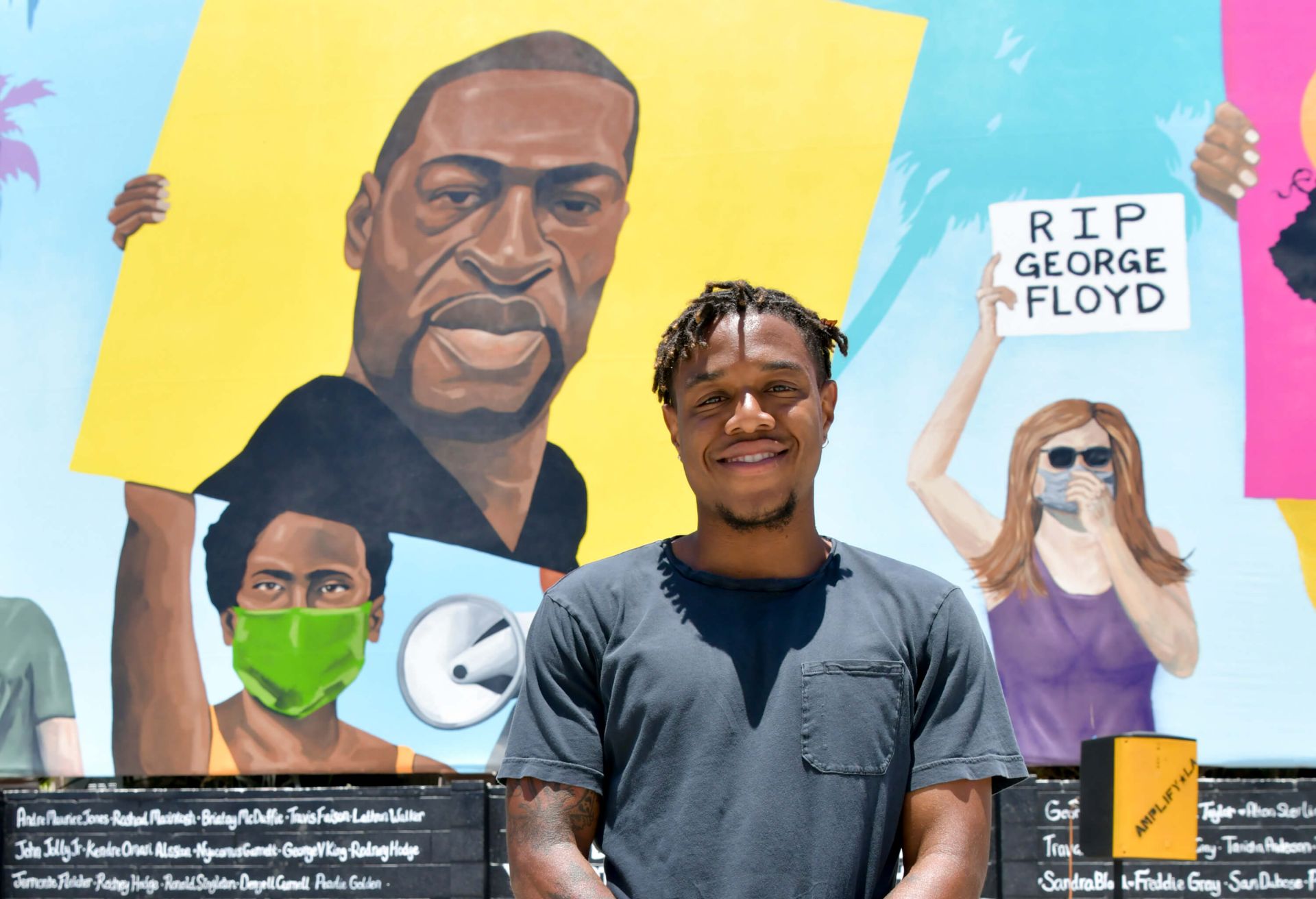 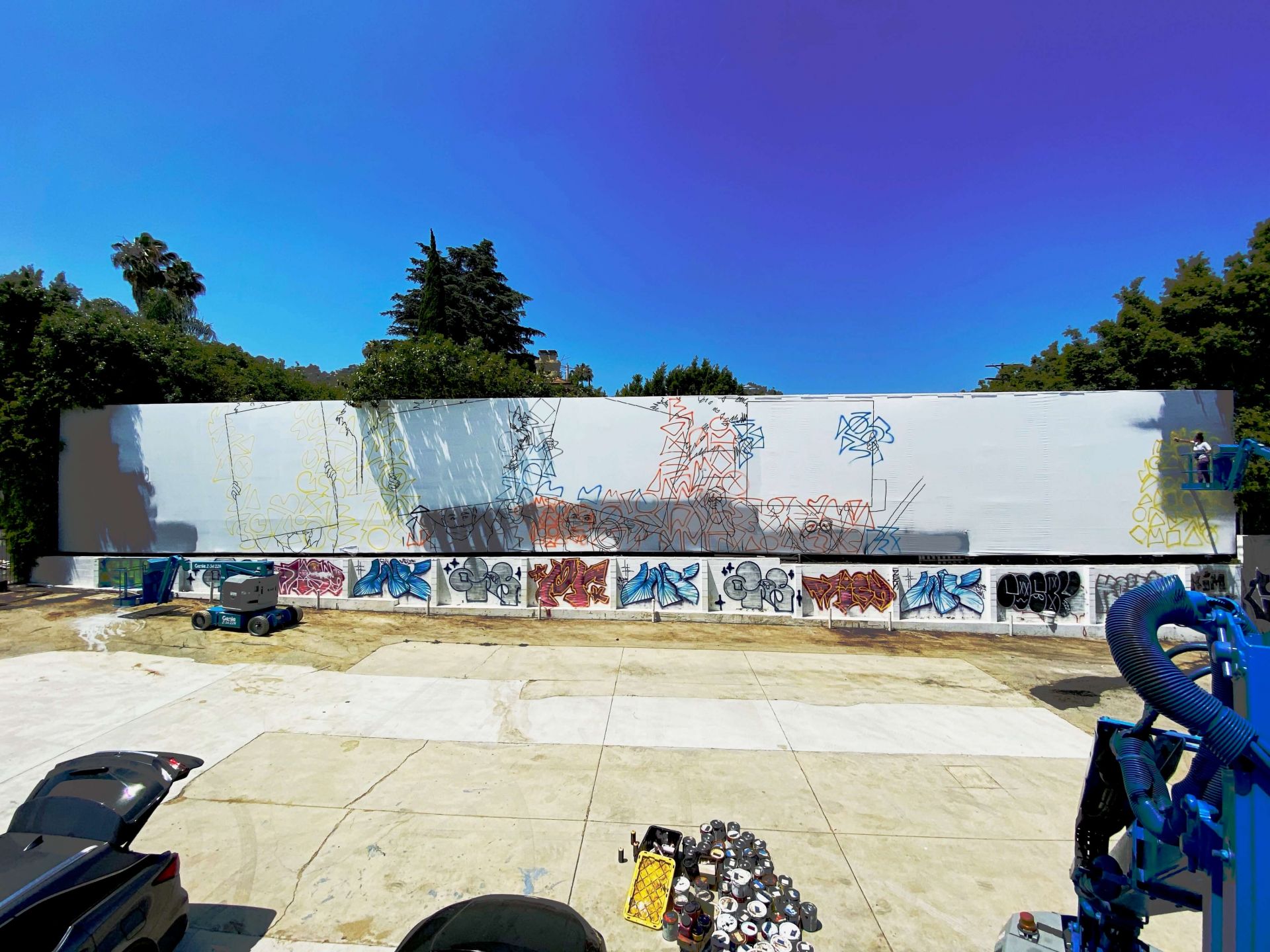 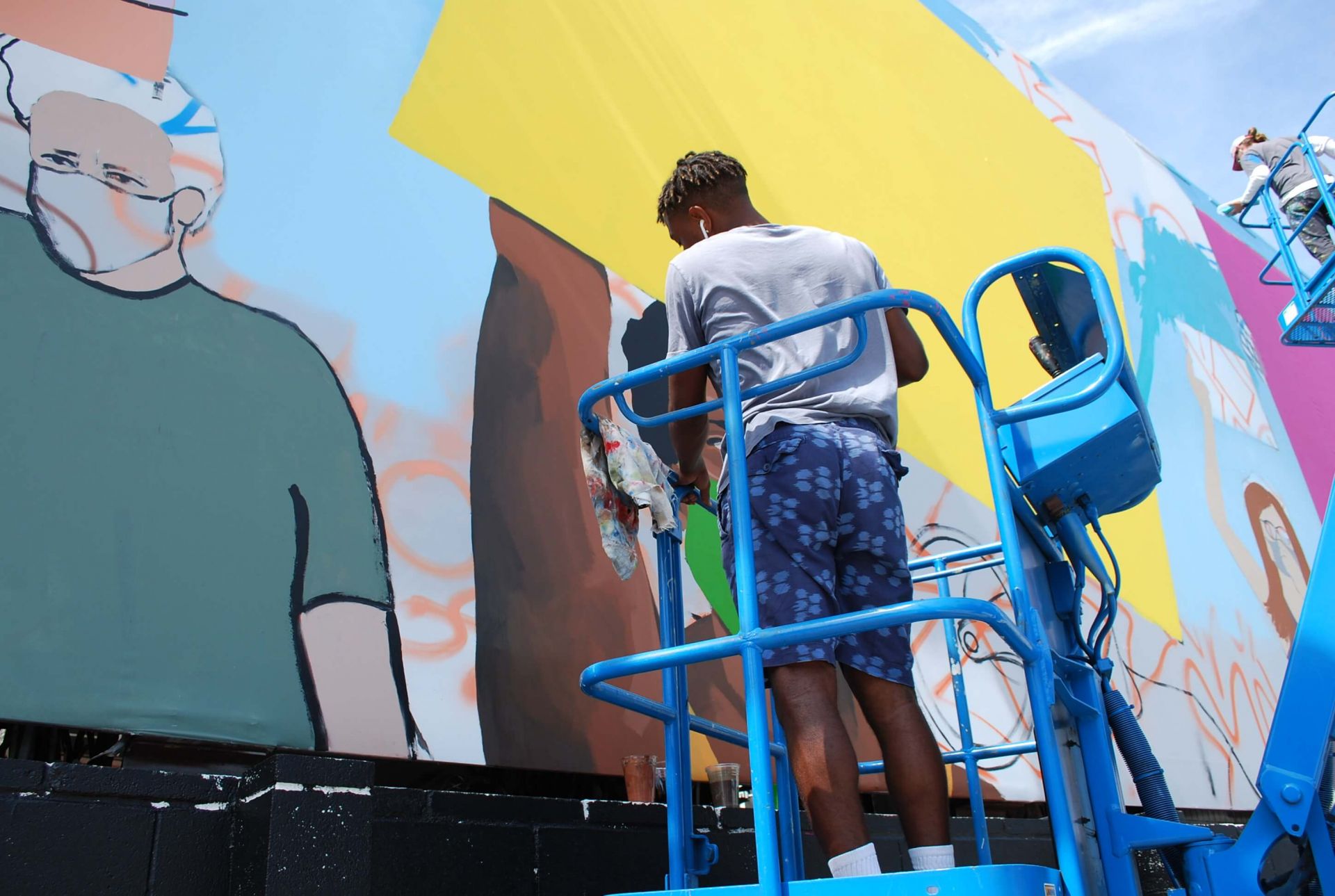 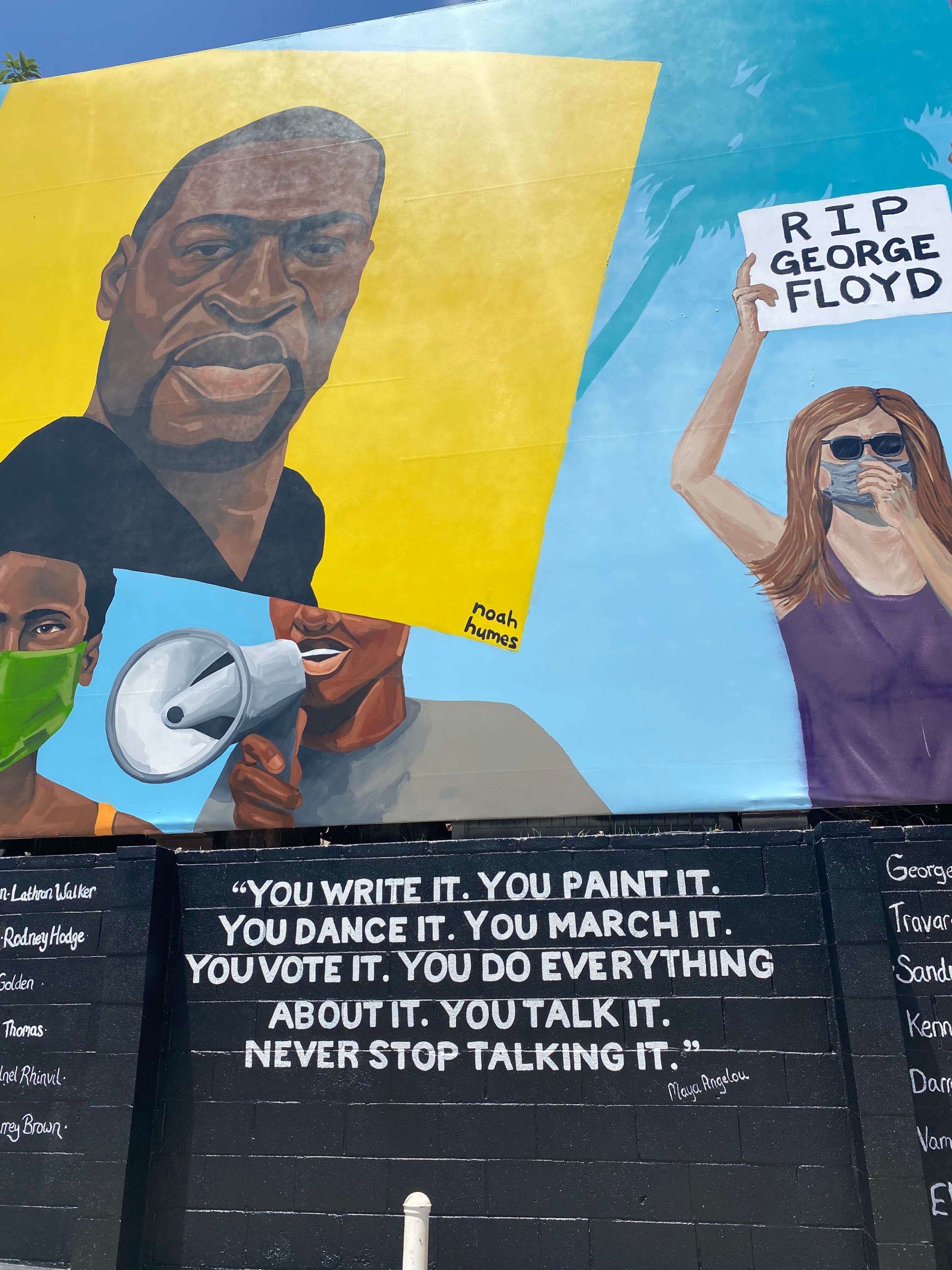 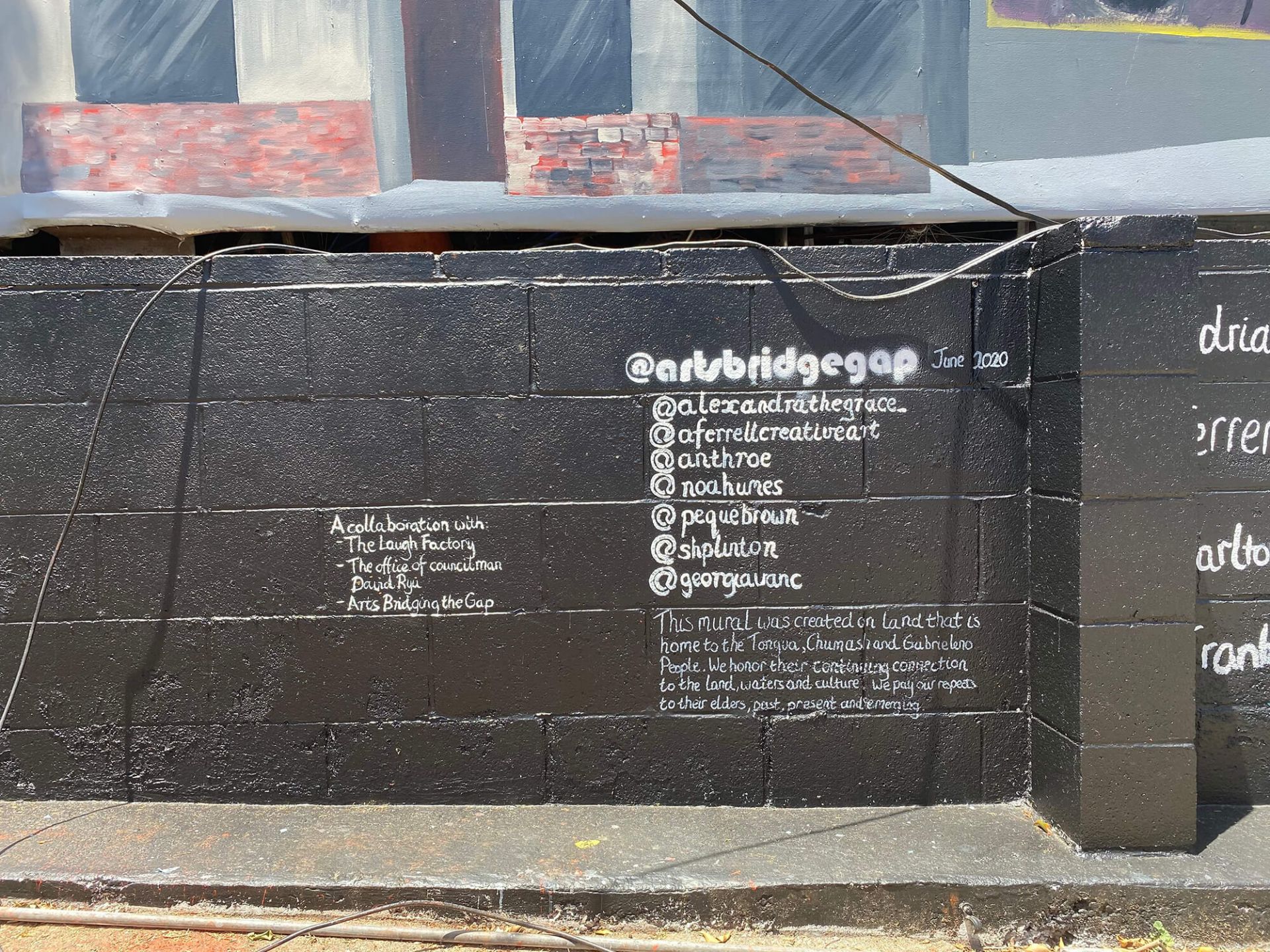 Among Humes’s contributions to the mural was the central section with George Floyd. “The unfortunate events regarding [the deaths of] Elijah McClain, Ahmaud Arbery, Breonna Taylor, George Floyd, and others inspired me to get out there and paint what is real, what is happening, and what I’m feeling,” Humes says. “The history of the Black subject constantly pushes me to create, it never leaves, it is too important.”

For Aaron Gonzalez, the opportunity to create work that was emblematic of the social justice climate of the time came through social media. A friend had posted on Instagram about painting a mural on a boarded-up Santa Monica storefront on Broadway and Seventh Street, as businesses were covering windows and doors during the summer protests. The work on that storefront sparked a desire to do more, so Gonzalez contacted the owner of a Venice Beach business, Burro, and she agreed to let him paint a mural on her storefront as well. “The two pieces kind of led into each other, all within the span of a week,” says Gonzalez. “The first mural opened me up to considering the possibilities, seeing all the boards that were going up temporarily, and the opportunities they presented to paint.” 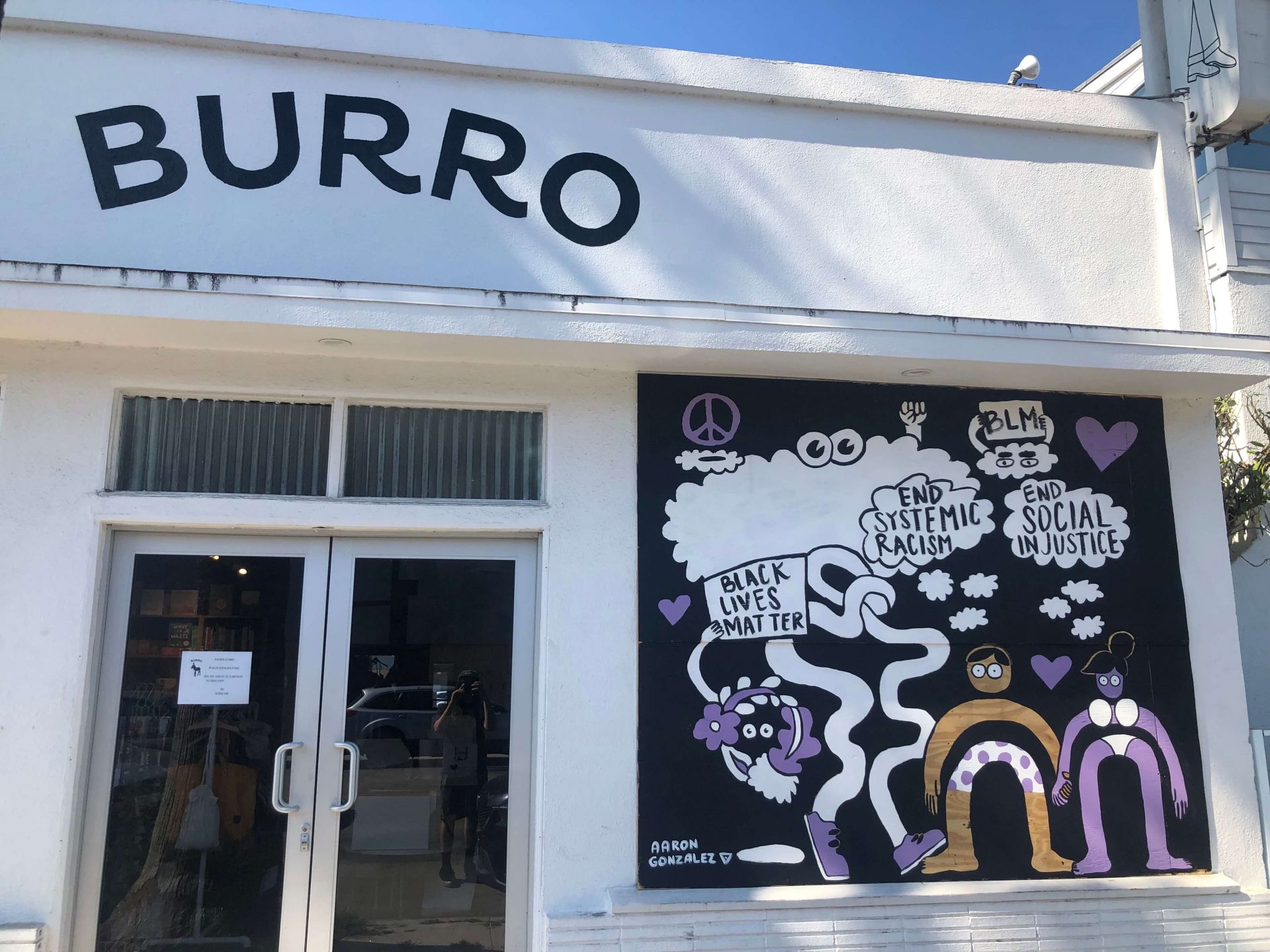 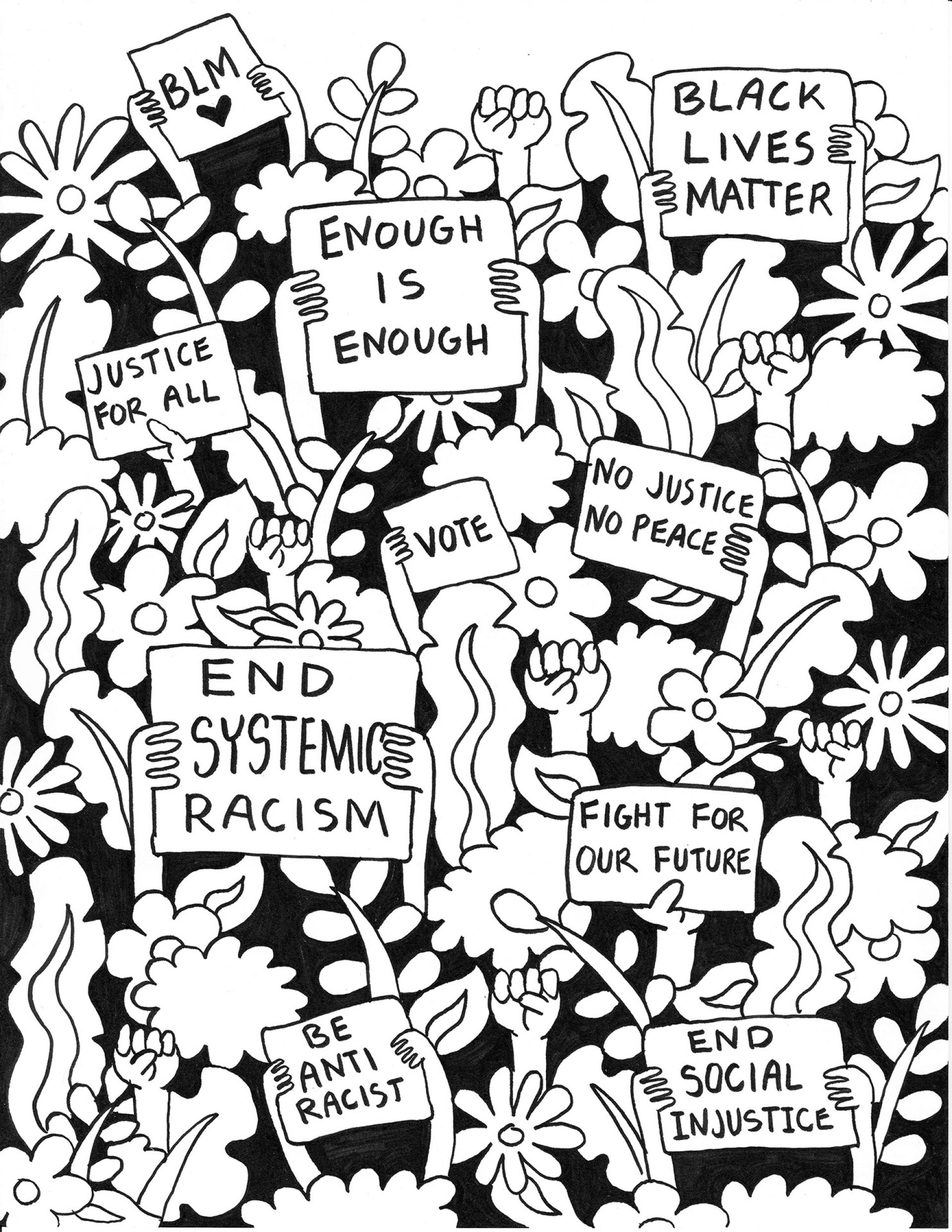 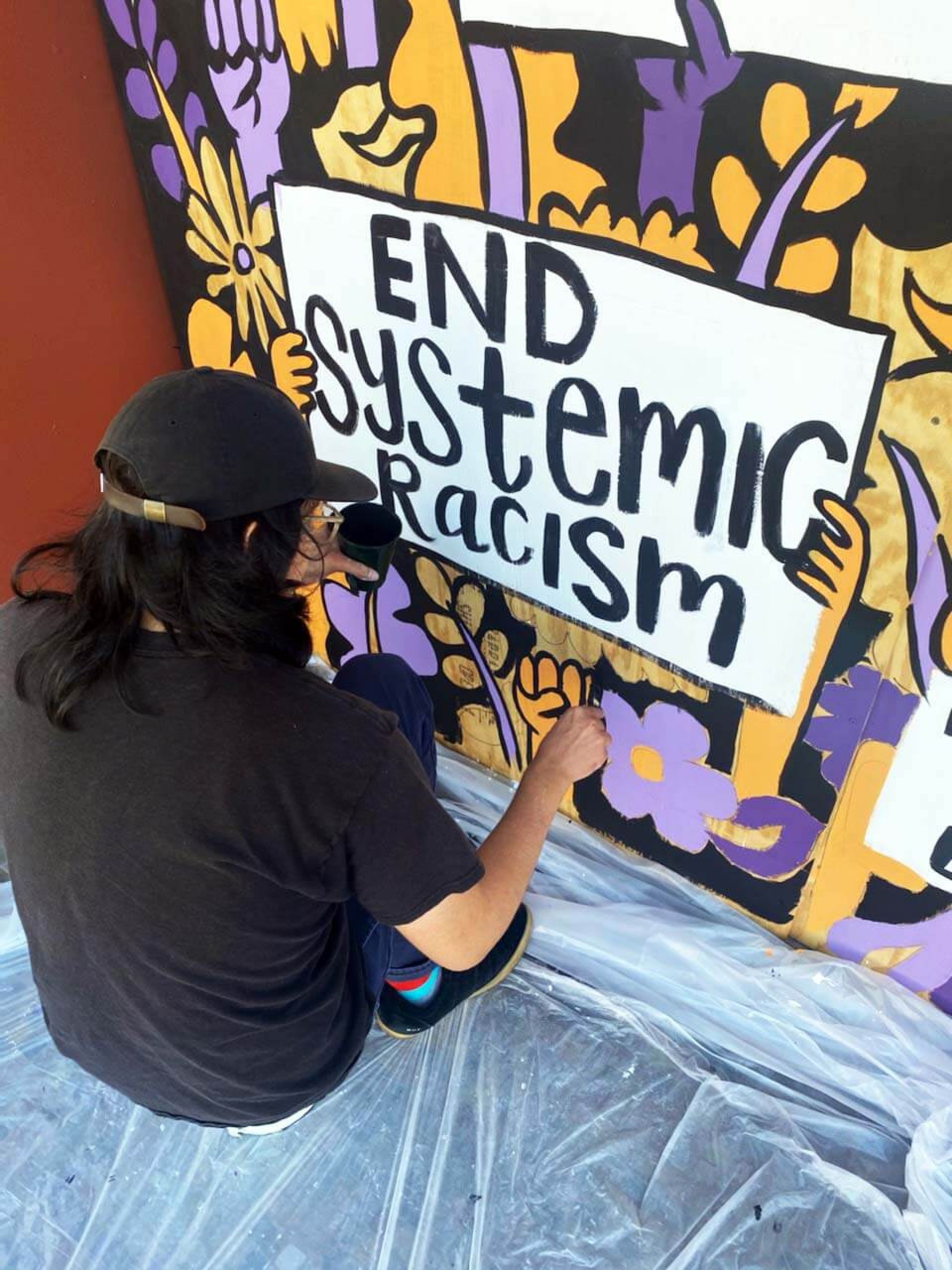 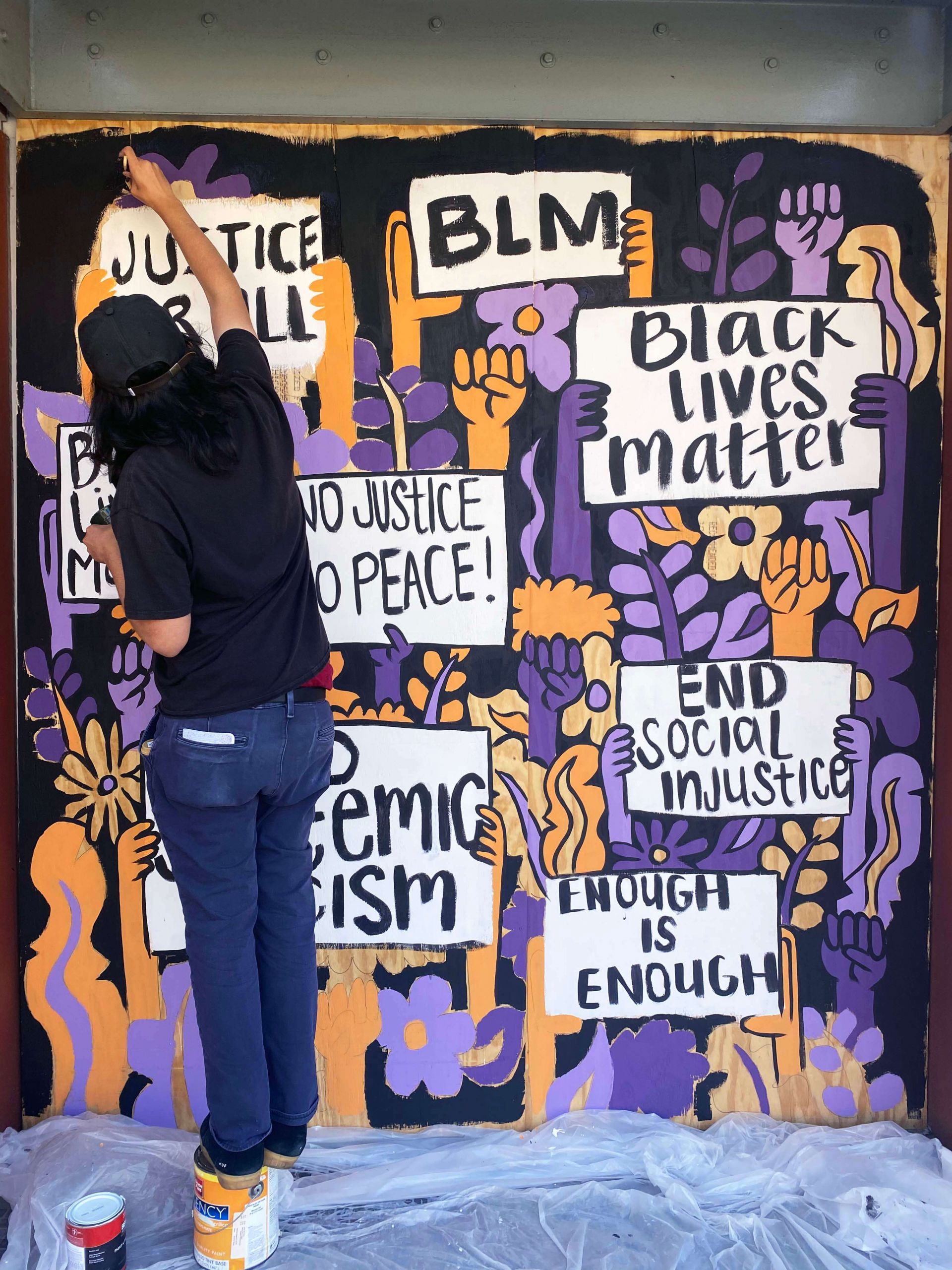 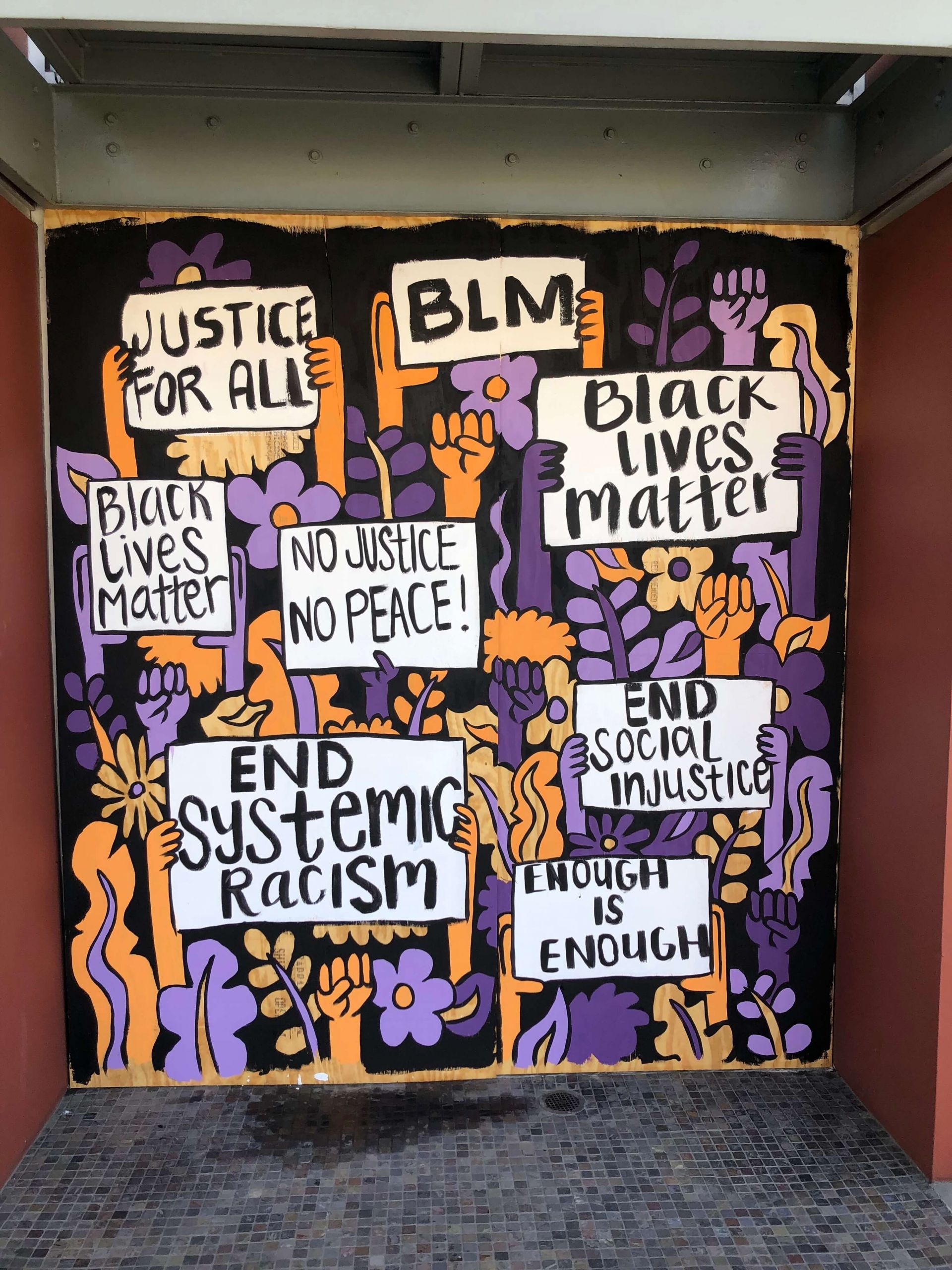 His two murals—one measured 8 by 6 feet, the other 6 by 7 feet—depicted people holding protest signs emblazoned with phrases like “End Systemic Racism,” “No Justice No Peace,” “Enough Is Enough,” and “Black Lives Matter,” painted in his signature whimsical and floral styles in purple, orange, and black. Gonzalez was inspired by the protest photography of fellow Otis alumnx and friend Treyvon Harper (’20 BFA Communications Arts). “Trey had been taking all these incredible photos of protests that he’d been going to,” Gonzalez says. “I was kind of referencing his photos as far as what I was going to put on the [protest] signage within my mural, and the messages I wanted to keep spreading.” The murals were up for between three and four weeks, when the business owners took down the boards covering their storefronts. All he has as proof of his work are photos, some of which he posted on social media.

“I think [public art] is a good opportunity to create awareness in a way that everybody can see,” he continues. “We all drive on the same streets and see the same things, the same billboards, and we read the same messages. Everyone comes from a certain bias or point of view, but with public art you’re kind of forcing it into people’s faces, and maybe to the ones who truly need to read the messages.”

It is the universality of public art that also motivates Patsy Pitts. “[A mural] becomes a living element of the neighborhood,” she says. “The primary audience is the passerby, no matter their age, gender, or belief. The idea that someone can gain some beauty, joy, or wisdom from one’s work is every artist’s goal…It should not be invasive or disrupt, but rather enhance the neighborhood. Color and subject matter should always be considered. No one hears a message if it is too loud.” 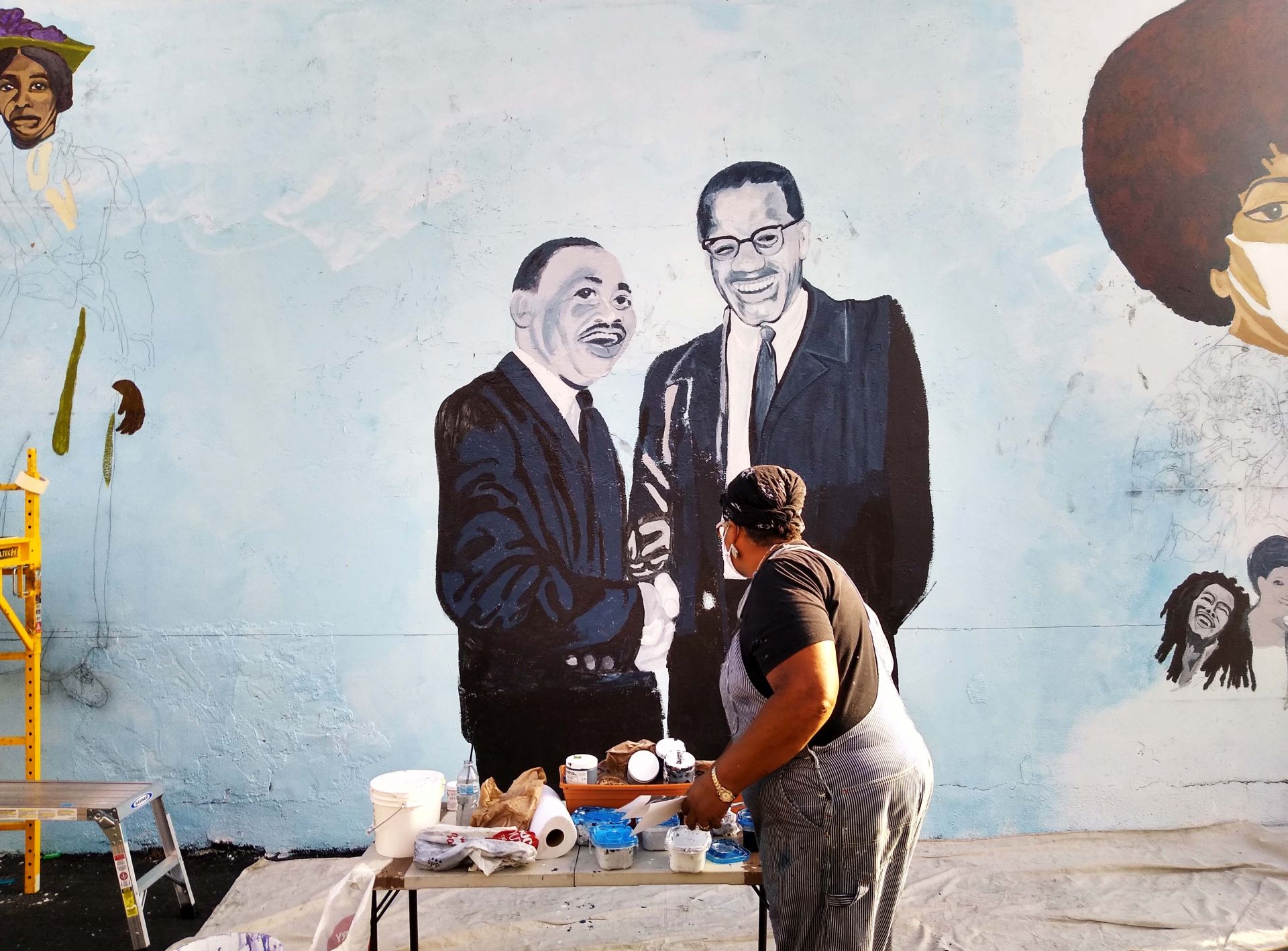 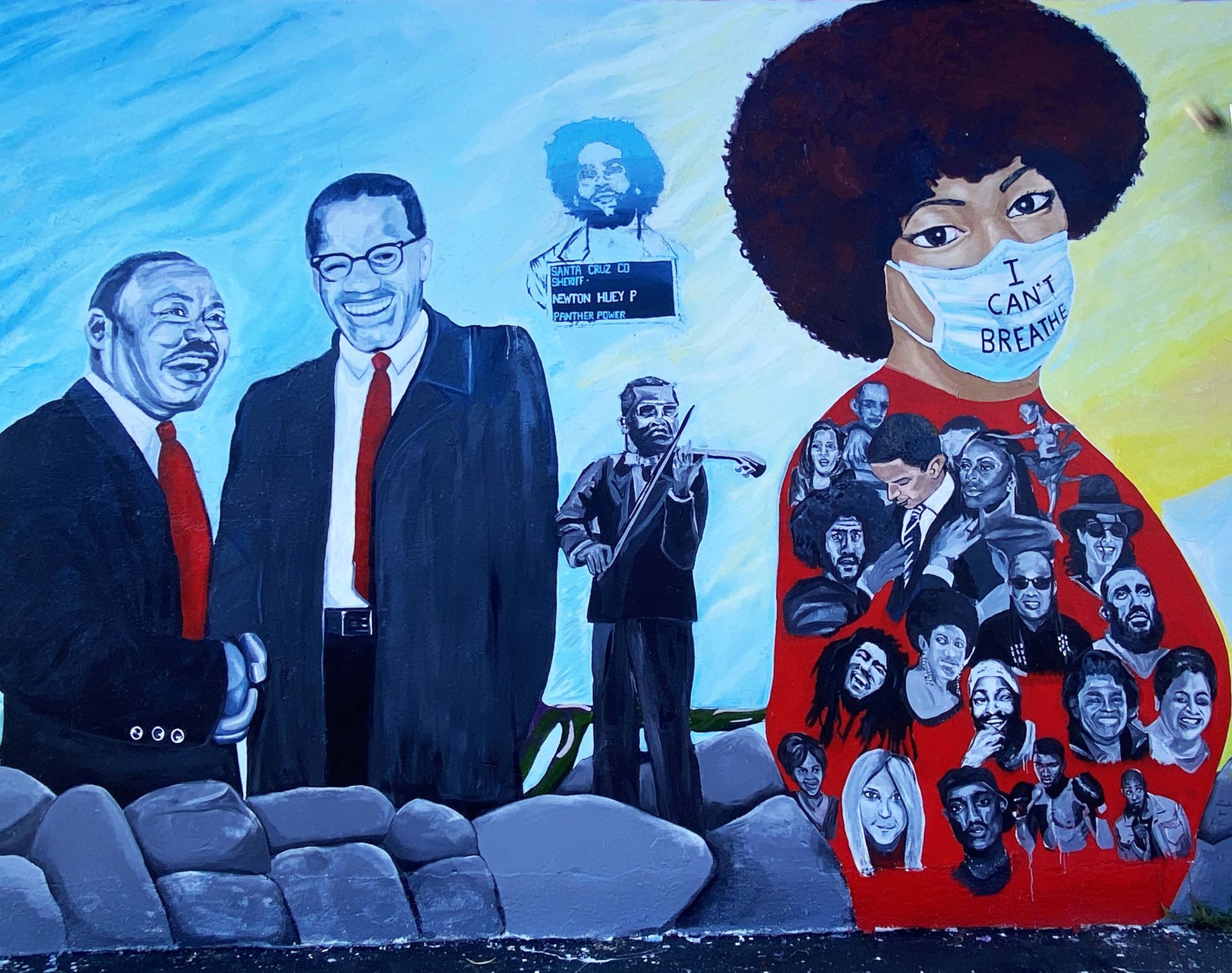 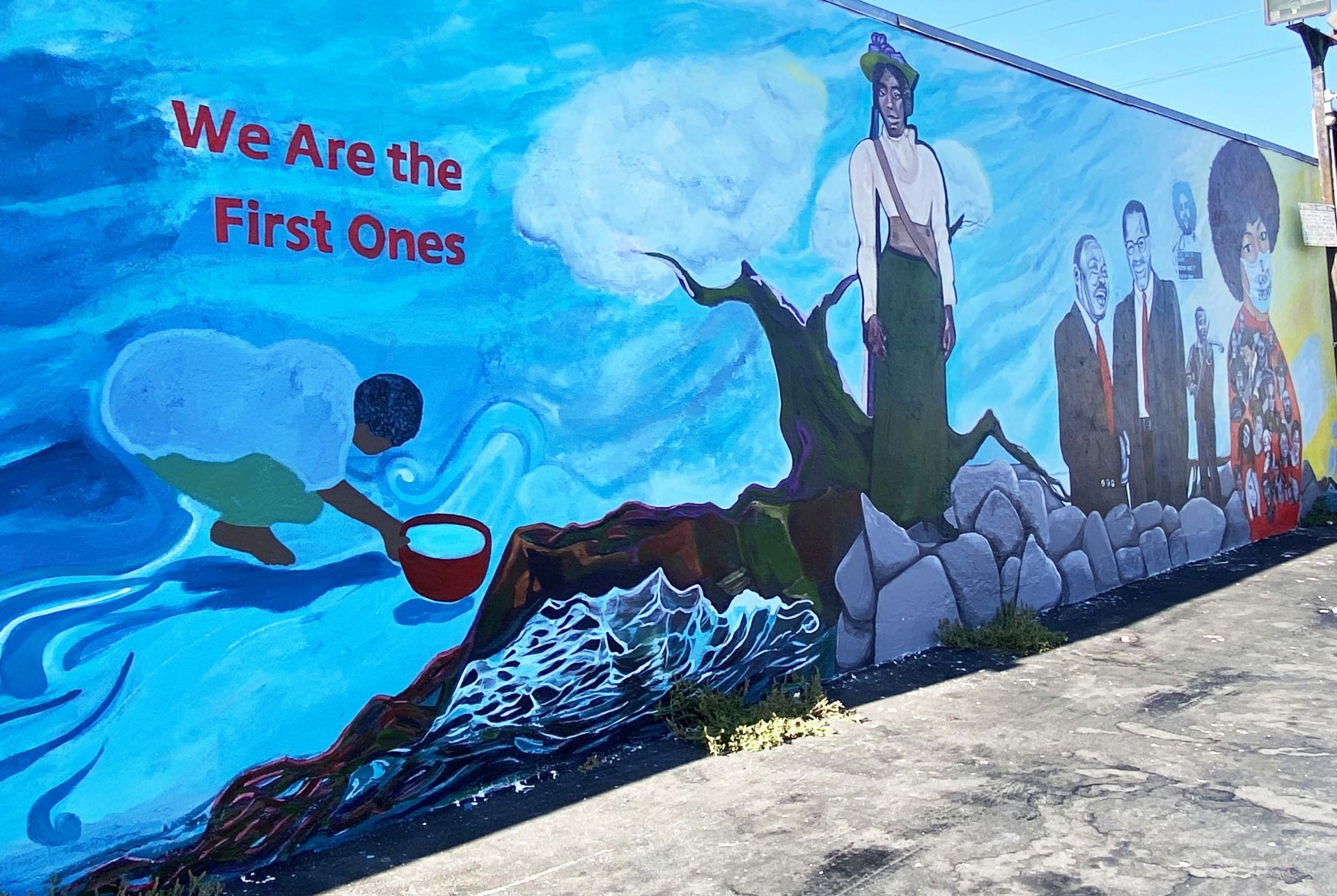 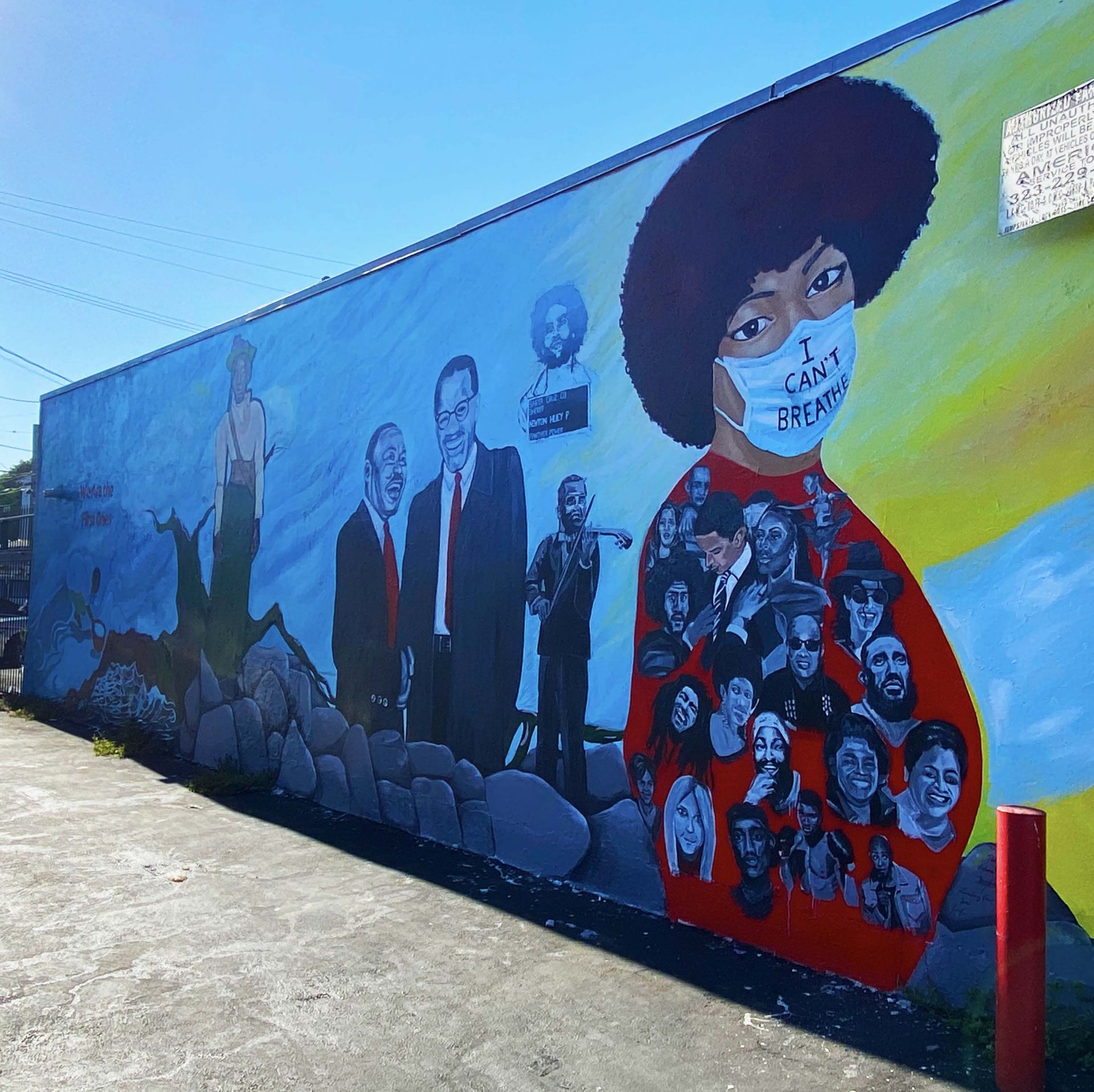 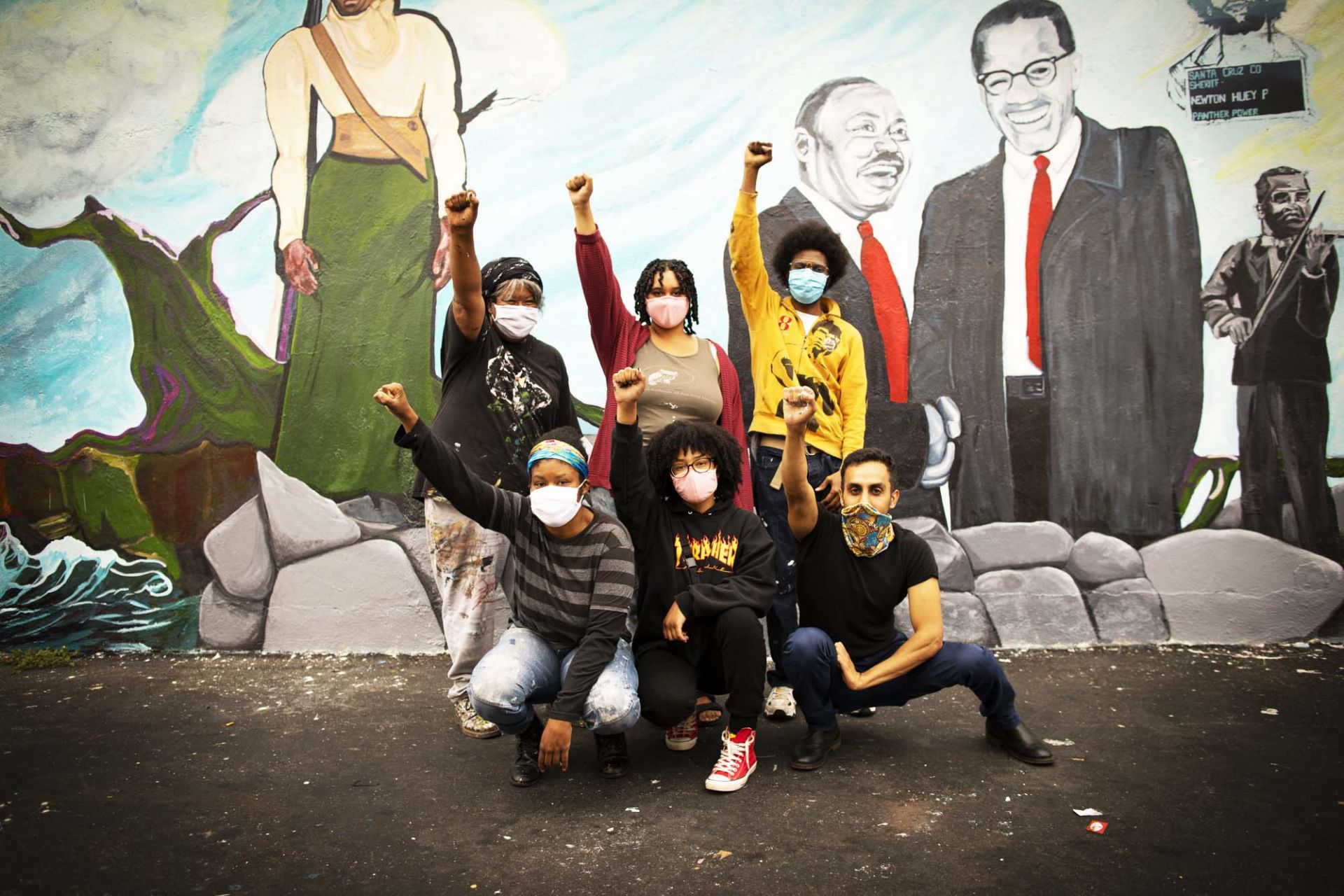 Her mural, We Are The First Ones, which measures 44 by 11 feet, is on a wall facing a Master Burger restaurant on Western Avenue near Leimert Park, and mixes such historical figures as Harriet Tubman, Malcolm X, and Martin Luther King Jr. with more contemporary ones like Nipsey Hussle and Colin Kaepernick, as well as portraits of her own family members. In painting the mural, Pitts was helped by several Otis peers, including Lindsey Johnson (’18 BFA Communication Arts), Adam Rodgers (BFA Digital Media), Hamid Razmkhah (’18 BFA Fine Arts), Katerina Skassi (’18 BFA Fine Arts), Joanne Kim (Otis College Adjunct Faculty), and her sister, Thera Pitts. “Painting outside is different; there are distractions, the weather, and surface issues that you may not be able to control. But if you are organized and working with good people it is amazing.”

For Pitts, the message of her mural was influenced by the current times, including the BLM movement, but it also was grounded in the Black forebears who overcame adversity in this country. As she said recently in The Wave, “This message is to showcase powerful figures in Black history and to remind whoever sees it of the power they hold today.”

Pitts’s combination of past and present figures who overlap each other presents a palimpsest that questions the limitations and linear application of time. Currently, she is working on a mural in South Central Los Angeles of Emmett Till and Mark Dawson Jr. “Emmett Till’s death is known for igniting the civil rights movement; he was the George Floyd of the ’50s,” she says. “Mark Dawson Jr. is my grandsons’ father, who was killed by police in August.”

The murals by Humes, Gonzalez, and Pitts approached the cultural conversation on racial equity and national progress from uniquely different vantage points, and yet their respective goals for engaging with their audience, the passerby, could not be clearer—challenging what is with what has been, and what could be.

Back to previous issues