Subtitle
The work of Otis alumnx Judithe Hernández, Eloy Torrez, Patssi Valdez, and others will be featured when “The Cheech” opens on June 18 in a long-overdue celebration and institutionalization of Chicanx art.
Byline
Eva Recinos
Feature Content

Renderings for the Cheech Marin Center for Chicano Art & Culture, which will open on June 18 in Riverside, California.

While recent exhibitions and media attention have done much to shine a light on Chicanx art and culture, this June a new museum is putting these stories front and center. It all started with an exhibition, which quickly became a concept that would take on a life of its own. So rarely does a single show lead to the opening of a major institution, but that’s exactly what happened in Riverside a few years ago—thanks to Richard “Cheech” Marin.

Perhaps best known as half of the counterculture comedy duo Cheech and Chong, which became famous in the 1970s for its comedy albums and films, Marin is also an art collector. He began collecting in the 80s and his collection has grown over the decades, making him one of the most significant collectors of Chicanx art in the United States.

In 2017, the Riverside Art Museum (RAM) hosted Papel Chicano Dos: Works on Paper, which highlighted pieces from Marin’s collection. The show included the work of Otis alumnx Carlos Almaraz (’74 MFA Fine Arts), Roberto Gil de Montes (’74 MFA Fine Arts), and Roberto Gutierrez (’93 Illustration), along with other artists such as Charles “Chaz” Bojórquez, Sonya Fe, and Margaret García. The works chronicled the contributions of these creative voices from the 1980s to the present. Attendance was high, with many art enthusiasts eager to see the collected works in one place.

The museum’s leadership and city officials noticed the exhibition’s impact, and an idea took form. RAM had recently received money from the California state budget and hoped to connect more with the Latinx and Chicanx community. So they asked Marin what he thought about opening a museum.

“We really needed a place that also encompasses not just art, but that could be a research center for the visual arts for scholars who are going to be rewriting the history of Chicano art.” —Judithe Hernández

María Esther Fernández, Artistic Director at The Cheech, says the museum came together at “light speed,” which ultimately “speaks to the dedication of not only the city, but the RAM board and staff—and the community.”

The Cheech sits in downtown Riverside and will open its doors to scholars and faculty from five surrounding colleges and universities to further scholarship on Chicanx art and culture. The institution is located in the former home of the Riverside Public Library’s main branch, which boasts more than 60,000 square feet. Just a few months shy of the opening, Marin still couldn’t believe it all came together. “It’s surreal,” he says. “It was an impossible dream, so I never dreamed it.”

For Marin, finding a new artist or artwork that moves him is “one of my greatest joys in life,” a passion that has informed his collecting over the decades. He gifted around 500 works to the RAM and says the institution expects it will take around five years to show his entire collection. In the process of preparing for the opening, Marin was re-acquainted with some artworks he hadn’t seen in years.

Cheech’s collection includes the work of Otis alumnx Judithe Hernández (’72 BFA Fine Arts,’79 MFA Fine Arts), an artist and educator who was a member of the influential artist collective Los Four. She first heard about plans for the museum a couple of years ago, when Marin’s team called to inquire about identifying some of Hernández’s work to feature in the soon-to-open center. The artist, who has been teaching for almost three decades—including at UC Santa Barbara, California State University Long Beach, and East Los Angeles College—has seen the need for spaces like The Cheech firsthand.

“It seems bizarre that we have not been able to create that kind of institution for our cultural patrimony ourselves,” Hernández says. “We’ve always been given little museum shows here, and been included in group shows there, but that’s only been for the last 40 years.”

One of those major moments was Los Four’s 1974 exhibition at the Los Angeles County Museum of Art, the first exhibition of Chicanx Los Angeles artists at the institution—and at any major museum. Marin’s collection includes work from Frank Romero (’58 Fine Arts), also an Otis alumnx who was part of Los Four, who, when reached about the upcoming opening, said The Cheech was “an exciting idea; I wish them well.”

Hernández notes that much of academia doesn’t require non-Chicanx students to learn about Chicanx art and culture—and that many scholars who have chronicled these cultural contributions are white. “We really needed a place that also encompasses not just art, but that could be a research center for the visual arts for scholars… who are going to be rewriting the history of Chicano art,” she says. 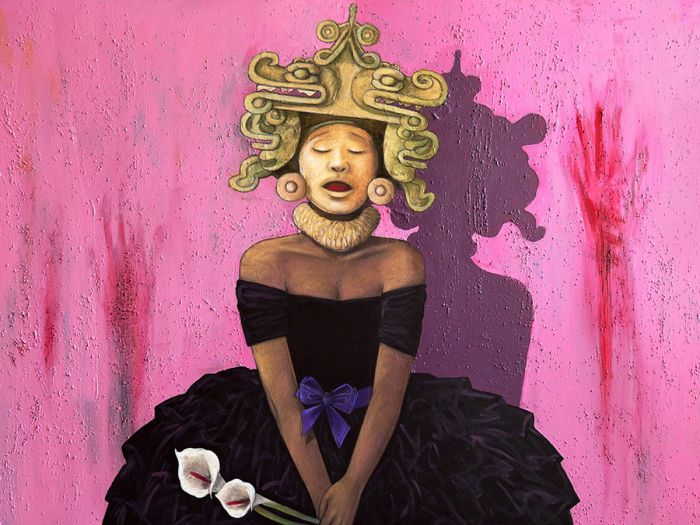 Artistic director Fernández stresses that the museum plans on showing the work of artists who have been overlooked, as well as emerging and mid-career ones. The institution will also host a variety of curatorial voices; Marin’s collection is a starting point for expanding the conversation. “We have a beautiful narrative of not only his collecting, his story, but also the evolving story of Chicana/Chicano/Chicanx art,” she says.

Otis alumnx Patssi Valdez (’85 BFA Fine Arts) has been a significant part of this narrative as a member of the collective Asco, which also called for more institutional acknowledgment of Chicanx artists. Reflecting on her own journey when she first started pursuing art, Valdez remarks that spaces like The Cheech weren’t common—something that inspired Asco to create its own path.

“We would go into abandoned buildings and make our own shows because we had decided that we weren’t going to wait to be asked,” Valdez says. “We just took it upon ourselves to make our own exhibition spaces.” 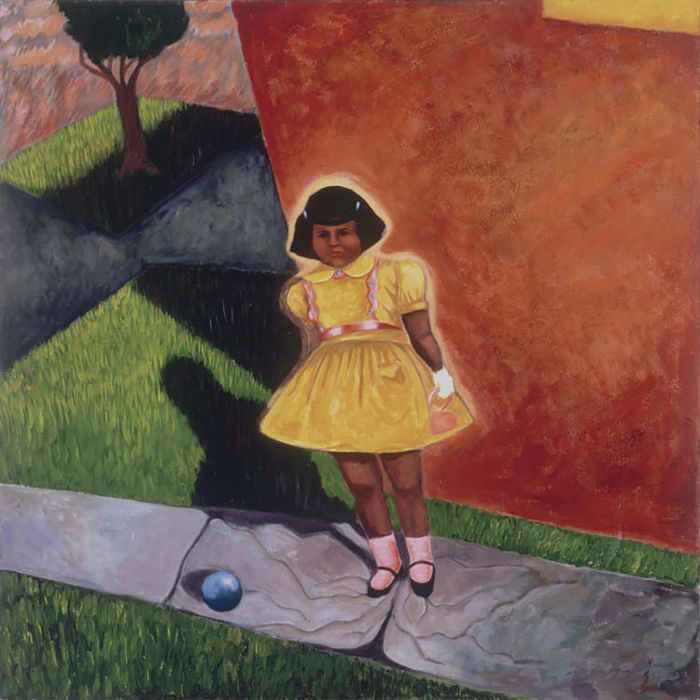 The Cheech, she says, “could only bring good for young people who don’t get to see themselves in museums,” and she hopes that a similar space will land more locally to Los Angeles as well. This feels particularly important, she explains, in light of museums’ recent efforts for more diversity and inclusion. When Marin started acquiring her work, she noticed. “Most were not people of color who collected my work,” Valdez says. “He was a rare bird.”

Marin stresses that while the institution highlights visual art, it’s meant to focus on Chicanx culture as a whole. He hopes that the richness of the museum’s resources will inspire visitors. Judithe Hernández says that even for students who want to work in new mediums, there are benefits to researching the history of the artists who came before them, particularly for Chicanx artists. “Sometimes when doing homework on yourself and who you are, where your roots are, you might find more content there for your work than you would ever imagine,” she says.

“In highlighting Chicanx art and introducing it into the mainstream through its exhibitions it can only inspire the generations to come. And the next generation will inspire the ones to follow them and so on.” —Eloy Torrez

Also featured in Marin’s collection is Otis alumnx Eloy Torrez (’79 BFA Fine Arts), an artist, painter, and muralist who moved to California from New Mexico as a teenager and credits Self Help Graphics with leading him to discover more about Chicanx history and culture. A teacher encouraged him to apply to the then-named Otis Art Institute of Parsons School of Design, so he headed there from Barstow. 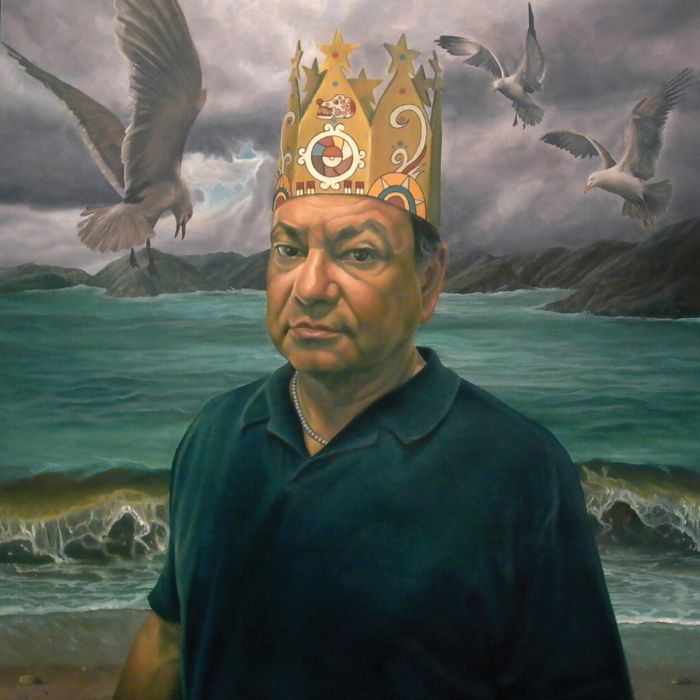 Eloy Torrez, It’s a Brown World After All, 2006 (Oil on canvas), The Cheech Marin Collection

Along with a few artists he knows, he heard about plans for The Cheech years ago. Over the course of his career, he got to know Marin through gallery- and art-related events, and Marin collected a few of his pieces, including It Is a Brown World After All, which features a portrait of Marin that was used as the poster for an exhibition at the Art Museum of South Texas. Torrez hopes a range of art enthusiasts visit the institution to get a deeper understanding of Chicanx culture.

“In highlighting Chicanx art and introducing it into the mainstream through its exhibitions it can only inspire the generations to come,” Torrez says. “And the next generation will inspire the ones to follow them and so on. The door is opening in recognizing Chicanx artists overall; I see it happening in numerous galleries and museums in Los Angeles and that is a good thing, especially for the new generation of artists.”

“There have been many Chicanx artists that have come out of Otis,” The Cheech’s Fernández says. In addition to these artists being featured as part of the inaugural exhibition, the opening will also include a work by Otis alumnx Felicia Montes (’11 MFA Fine Arts + Public Practice) and the Mujeres de Maiz collective, which she co-founded. 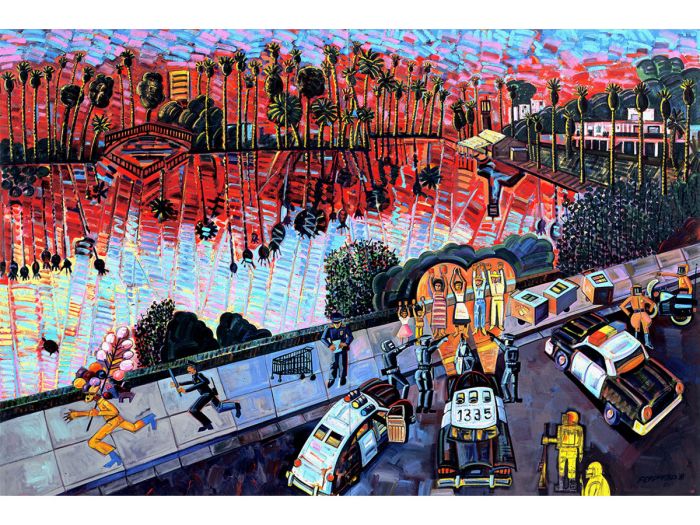 Frank Romero, Arrest of the Paleteros, 1996 (Oil on canvas), The Cheech Marin Collection

Marin also reflected on the work of Otis alumnx in his collection, and how this connection has been important to the institution. “We’re very proud of them and their time at Otis and the things they learned and applied to their art,” he says.

He hopes to make a lasting impact with his institution; the entire process has been new to him, and his close relationship with the artworks is evident, particularly as the center gears up for its opening. “It’s like sending your kids off to college in Switzerland or something,” he says.

Ultimately, the museum hopes to foster a creative energy within the Inland Empire and, as Fernández puts it, expand the ideas of where in Los Angeles you can see major art: “My hope is that folks throughout California and the nation will come and want to learn and see the richness and complexity of Chicanx art and Latinx art at the center.”